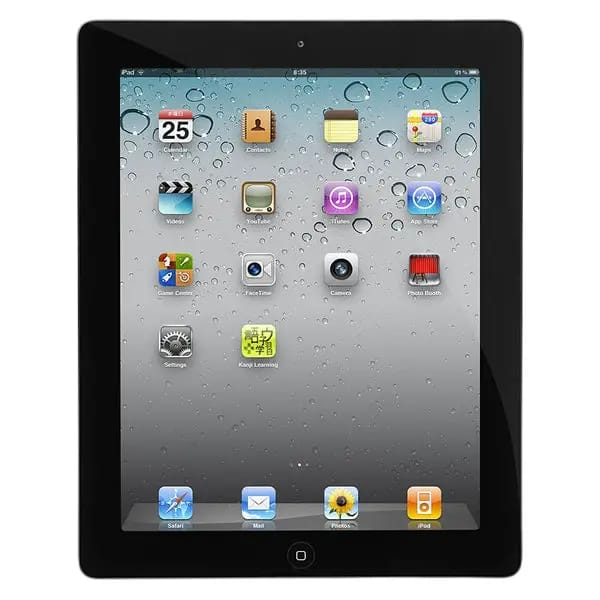 The iPad 2 is a tablet designed, developed and marketed by Apple Inc. Compared to the first iPad, the second model in the iPad line gained a faster dual-core A5 processor and a lighter build structure. It was the first iPad to feature VGA front-facing and 720p rear-facing cameras designed for FaceTime video calling.

The device was initially available with three storage sizes – 16, 32, and 64 GB – and two varying connectivity options – Wi-Fi only or Wi-Fi and cellular. Each device variation is available with a black or white front glass panel. However, upon the release of the (3rd_generation) iPad in March 2012, only the 16 GB variation remained available.

The product became available from March through May 2011.

The device received a generally positive reception from various blogs and publications. Although it was praised for its hardware improvement, such as the new Apple A5 chip, the software restriction on the iPad 2 and iOS, in general, drew criticism from various technology commentators. The device sold well in its first month of sales, with 2.4–2.6 million units sold and 11.12 million in the third quarter of 2011.

A popular product, with a lower screen resolution and performance than the two Retina models that followed it but a lighter build and longer battery life, it remained in the Apple line-up as an entry-level iPad model for three years until March 2014, latterly with a silent upgrade to a die-shrunk version of the A5 processor. Its basic design formed the core of the first iPad mini, which had the same screen pixel count and similar features at a smaller size.

Originally shipped with iOS 4, with the release of iOS 9, the iPad 2 became the only device to have received six major versions of iOS.

Apple sent invitations to journalists on February 23, 2011, for a media event on March 2. On March 2, 2011, CEO Steve Jobs unveiled the device at the Yerba Buena Center for the Arts, despite being on medical leave. Upon the announcement of the iPad 2, the original iPad was discontinued from sales online and at Apple-authorised retail stores.

Apple began selling the iPad 2 on its website on March 11 and in its U.S. retail stores at 5 pm local time on that date. Many stores in major cities, such as New York, sold out within hours. Online shipping delays had increased to three to four weeks on Sunday and four to five weeks by Tuesday.

On April 29, 2011, the release date for Japan was postponed due to the earthquake and tsunami which struck the nation on March 11, 2011. The iPads were delayed due to the NAND flash storage chip used in the iPads being created by Toshiba, which was affected by the earthquake and tsunami, thus resulting in the suspension of operations for an indefinite period of time. The slowdown caused analysts to downgrade Apple’s stock.

The iPad 2 was released in Hong Kong, India, South Korea, Singapore, Philippines, Malaysia and other countries, including Japan, on April 29, 2011. It was then released in numerous other nations, including China, Estonia, Thailand, Brazil, Russia and Taiwan, on two major release dates, May 6 and 27.

In late March 2011, the iPad 2 was released alongside iOS 4.3, which primarily introduced Airplay Mirroring and Home Sharing, among other features.

On October 12, 2011, upon the release of the iPhone 4S, the iPad was upgradable to the iOS 5 firmware update, which brought over 200 new user features to iOS-compatible devices, including Notification Center, iMessage, Reminders, and an updated notifications system, using a new “banner” style instead of the previously used pop-up “alert” style.

The iPad 2 has several applications by default, including Safari, Mail, Photos, Video, Music, iTunes (store), Maps, Notes, Calendar, Photo Booth, and Contacts. The App Store is also available as a default application, it enables users to download from a database of applications, and the developers set the price of these applications.

Like all iOS devices, the iPad 2 can sync music, videos, apps and photos with a Mac or PC using iTunes, although when using iOS 5 and later, the user does not have to connect the iPad to the computer. iCloud also allows users to back up and sync their data with other compatible iOS devices via the internet.

Game Center is available as a native social gaming platform on iOS; games downloaded via the App Store that has this feature enabled can integrate their achievement points, high scores and bonus system across all iOS devices into a single accumulative point and social platform.

The iPad 2 also adds the ability to run GarageBand, iMovie, and the iWork apps Pages, Keynote, and Numbers. These applications do not come with the iPad but are official applications from Apple sold within the App Store. On March 7, 2012, after the unveiling of the third generation iPad, the firmware of the iPad 2 was upgradable to iOS 5.1.

The iPad 2 is compatible with iOS 7, which was released on September 18, 2013. However, some features are not available. For example, like the iPhone 4, the Notification Center and the Control Center use the transparent style instead of the translucent style in later iOS models. Also, AirDrop, first released in iOS 7, was only supported by the iPad 4 or later.

The iPad 2 can run iOS 8, released on September 17, 2014, making it the first iOS device to run five major versions of iOS (including iOS 4, 5, 6, 7, and 8). While the OS runs on the device, most of its new features do not work because of relatively aged hardware; therefore, its performance is limited.

Users have also reported numerous problems after receiving the update, including the accessibility features and battery-related issues. Many users speculated that the iPad 2 was going to be dropped from updating to iOS 8 along with the iPhone 4, the same process that happened with the iPhone 3GS and the iPod Touch (fourth generation) and earlier models, considering that the model was more than three years old.

It was confirmed on June 8, 2015, at Apple’s WWDC that the iPad 2 would run iOS 9, making it the first iOS device to run six major versions of iOS. As with previous releases, though, many headline features were unavailable on the iPad 2, including predictive Siri, translucency effects, split-view, slide-over and picture-in-picture multitasking and the Health app.

On June 13, 2016, with iOS 10, Apple dropped support for the iPad 2 because of its hardware and performance issues. The same goes with its successor and the iPad Mini (1st generation), making iOS 9.3.5 (Wi-Fi) or iOS 9.3.6 (Wi-Fi + Cellular) the final version that will run on the device.

The iPad 2 features an Apple A5 package-on-package (PoP) System-on-chip (SoC), which comprises a 1 GHz dual-core 32-bit Cortex-A9 CPU, 512 MB of RAM and a dual-core PowerVR SGX543MP2 GPU. Other features include front and rear cameras, a three-axis gyroscope, headset controls, proximity and ambient light sensors, a microphone, magnetometer, accelerometer and a 9.7-inch multi-touch screen with a maximum resolution of 1024×768 hence resulting in 132 PPI.

The iPad 2 has four physical switches, including a home button near the display that returns the user to the home screen and three plastic physical switches on the sides: wake/sleep, volume up/down, and a third switch for either screen rotation lock or mute. The home button on the iPad 2 is “easier to double tap” than on the previous generation of the iPad.

Apple reduced the size of the iPad by eliminating the stamped sheet metal frame from the display, integrating new thinner glass technology for the touch screen overlay, and slightly reducing the space between the display and battery. The iPad 2’s screen is thinner, lighter, and stronger than the original iPad’s. The iPad 2 also supports screen mirroring via the digital AV adapter and AirPlay as iOS 5.

The iPad 2 has a 25 W·h rechargeable lithium-ion polymer battery that lasts 10 hours, like the original iPad. It is charged via USB or includes a 10 W, 2 A power adapter. The battery is 2.5 mm thick, 59% smaller than the original and has three cells instead of two.

The improvements allowed the injection-moulded plastic support frame to be omitted. The 10 W USB power adapter provides 4x the power of a conventional USB port. The tablet has an audio frequency response of 20 Hz to 20 kHz. Without third-party software, it can play the following audio formats: HE-AAC, AAC, Protected AAC, MP3, MP3 VBR, Audible formats (2, 3, 4, AEA, AAX, and AAX+), ALAC, AIFF, and WAV.

The revised tablet adds front- and rear-facing cameras, which allow FaceTime video calls with other iPad 2s, the third-generation iPad, iPhone 4 and 4S, the fourth-generation iPod Touch and Macintosh computers (running Mac OS X 10.6.6 or later with a webcam).

The 0.3 MP front camera shoots VGA-quality 30 frame/s video and VGA-quality still photos. The 0.7 MP back camera can shoot 720p HD video at 30 frame/s and has 5× times digital zoom. Both shoot photos in a 4:3 fullscreen aspect ratio.

The rear camera shoots video in 16:9 widescreen to match the 720p standard, although only the central 4:3 part of the recording is shown on the screen. The forward-facing camera shoots in 4:3.

Also, the iPad 2 3G model includes a plastic cap-like band at the top of the back for the 3G antenna. The metallic grille for the microphone is replaced with a matching plastic black grille on the 3G model. GSM models of iPad 2 use a SIM card, while CDMA models use an ESN to connect to the cellular network.

After the announcement and release of the third-generation iPad, the iPad 2, which continued to be available for purchase, received a hardware upgrade. The upgraded variant of the iPad 2 features a smaller version of the Apple A5 SoC, which can reduce battery consumption.

What are the specifications of the Apple iPad 2 CDMA tablet?

Here’s a summary of the technical specifications for the Apple iPad 2 WiFi tablet: 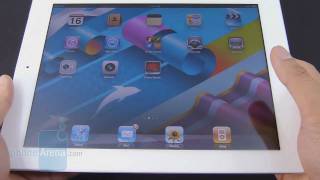 Jobs originally did not want to offer his products in white, but he was swayed after being introduced to the “moon gray” shade. Pretty surprising considering the iconic clean, white look of Apple products today.