The iPad Air (3rd generation) (colloquially referred to as iPad Air 3) is a tablet computer developed and marketed by Apple Inc. It was announced and released on March 18, 2019, alongside the 5th-generation iPad Mini.

It resembles a design identical to the iPad Pro 10.5 inch; overall updates include an upgraded Apple A12 Bionic, a slightly wider 10.5-inch Retina Display, faster memory (3GB of LPDDR4X), and support for Bluetooth 5.0 and Apple Pencil (first generation).

It was discontinued on September 15, 2020, following the introduction of the iPad Air (4th generation).

The third-generation iPad Air features an upgraded 7MP front camera (used first in the iPhone 7 and up to the iPhone XS) compared to the 1.2MP camera found in the previous generation. However, it retains the same older 8MP rear camera, which cannot be recorded in 4K video.

The third-generation iPad Air has a 2.49GHz six-core processor, the Apple A12 Bionic chip. That chip has a 66% faster clock speed than the 1.5GHz triple-core Apple A8X in the second-gen. It also has a True Tone display, which allows the LCD to adapt to ambient lighting to change its colour and intensity in different environments, and P3 wide colour gamut to allow the LCD shows more vibrant colours.

What are the specifications of the Apple iPad Air 3rd Generation (2019) tablet?

Here’s a summary of the technical specifications for the Apple iPad Air 3rd Generation (2019) tablet: 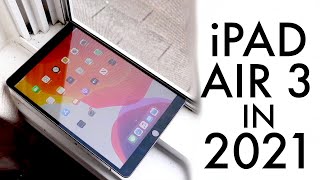 By 2011, the Apple iPhone accounted for 40% of the company’s annual revenue. It’s estimated that over three-quarters of Apple’s income is from products that were invented within the past 10 years.

“I think the world’s a better place because Bill realized that his goal isn’t to be the richest guy in the cemetery, right?”
― Steve Jobs … (next quote)