It has a nearly identical design to its predecessor, the first-generation iPad Mini. Still, it features internal revisions such as adding the A7 system-on-a-chip and 2,048 x 1,536 resolution Retina Display.

The second-generation iPad Mini largely has the same design as the first iPad Mini. One notable change is the inclusion of a Retina Display, matching the screen resolution of the full-sized Retina iPad models. The slate-coloured back panel of the first-generation iPad Mini was discontinued in favour of “space grey”, a black colour, and the white colour still remains.

The second-generation iPad Mini was released with the iOS 7 operating system, which debuted shortly earlier than the iPad on September 18, 2013. Apple’s chief designer, Jony Ive, described the update of iOS 7’s new elements as “bringing order to complexity”, highlighting features such as refined typography, new icons, translucency, layering, physics, and gyroscope-driven parallax as some of the major changes to the design.

The design of both iOS 7 and OS X Mavericks (version 10.9) noticeably departed from previous skeuomorphic design elements such as green felt in Game Center, wood in Newsstand, and leather in Calendar, in favour of a flat, colourful design.

The iPad mini can be a hotspot with some carriers, sharing its Internet connection over Wi-Fi, Bluetooth, or USB. It can also access the Apple App Store, a digital application distribution platform for iOS.

The second-generation iPad Mini comes with several pre-installed applications, including Siri, Safari, Mail, Photos, Video, Music, iTunes, App Store, Maps, Notes, Calendar, Game Center, Photo Booth, and Contacts. Like all iOS devices, the iPad can sync content and other data with a Mac or PC using iTunes, although iOS 5 and later can be managed and backed up without a computer.

Although the tablet is not designed to make phone calls over a cellular network, users can use a headset or the built-in speaker and microphone to place phone calls over Wi-Fi or cellular using a VoIP application, such as Skype. The device has a dictation application using the same voice recognition technology as the iPhone 4S.

This enables users to speak; the iPad types what they say on the screen. However, the iPad must have an internet connection (via Wi-Fi or cellular network) due to the feature’s reliance on Apple servers to translate the speech.

The second-generation iPad Mini has an optional iBooks application, which displays books and other ePub-format content downloaded from the iBookstore.Several major book publishers, including Penguin Books, HarperCollins, Simon & Schuster and Macmillan, have committed to publishing books for the device. Despite being a direct competitor to the Amazon Kindle and Barnes & Noble Nook, both Amazon.com and Barnes & Noble offer e-reader apps for the iPad.

The iPad mini 2 has not been supported past iOS 12 due to the hardware limitations of its A7 chip.

Although the second-generation iPad Mini inherits hardware components from the iPhone 5S, such as its 64-bit Apple A7 system-on-chip and Apple M7 motion processor, it uses the same home button as its predecessor. It, therefore, does not support the Touch ID fingerprint sensor. It also includes a 5-megapixel rear-facing camera, a 1.2 MP FaceTime HD front-facing camera, support for 802.11n Wi-Fi networking, and an estimated 10 hours of battery life.

As with all previous generations of iPad hardware, there are four buttons and one switch on the second-generation iPad Mini. With the device in its portrait orientation, there are a “home” button on the face of the device under the display that returns the user to the home screen, a wake/sleep button on the top edge of the device, and two buttons on the upper right side of the device performing volume up/down functions, under which is a switch whose function varies according to device settings, functioning either to switch the device into or out of silent mode or to lock/unlock the orientation of the screen.

In addition, the WiFi-only version weighs 331 grams, while the cellular model weighs 341 grams – slightly more than their respective predecessors. The display responds to other sensors: an ambient light sensor to adjust screen brightness and a 3-axis accelerometer to sense orientation and switch between portrait and landscape modes.

The second-generation iPad Mini audio playback is in stereo with two speakers on either side of the lightning connector.

The second-generation iPad Mini has 16, 32, 64 or 128 GB of internal flash memory, with no expansion option. Apple sells a “camera connection kit” with an SD card reader, but it can only be used to transfer photos and videos.

All second-generation iPad Mini models can connect to a wireless LAN and offer dual-band Wi-Fi support. The tablet is also manufactured with or without the capability to communicate over a cellular network.

Apple’s ability to handle many different bands in one device allowed it to offer, for the first time, a single iPad variant which supports all the cellular bands and technologies deployed by all the major North American wireless providers at the time of the device’s introduction.

What are the specifications of the Apple iPad Mini 2 with Retina Display tablet?

Here’s a summary of the technical specifications for the Apple iPad Mini 2 with Retina Display tablet: 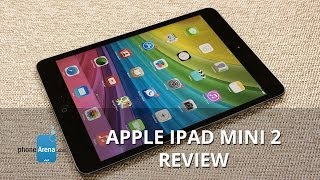 Bill Clinton once invited Jobs to spend the night sleeping in the Lincoln bedroom of the White House.