The fifth-generation iPad Mini (stylized and marketed as iPad mini and colloquially referred to as iPad Mini 5 is a tablet computer in the iPad Mini line, designed, developed, and marketed by Apple Inc.

Announced in a press release along with the third-generation iPad Air on March 18, 2019, and released the same day, it was the first iPad Mini that was released without a live press event. Its predecessor, the iPad Mini 4, was discontinued on the same day.

It shares a similar design to the iPad Mini 4 and features the Apple A12 Bionic chip, 64 or 256GB storage, and a more modernly upgraded 7.9-inch Retina Display with support for Apple Pencil (1st Generation), True Tone display, and Bluetooth 5.0. iFixit’s teardown shows this iPad Mini is equipped with an upgraded 3GB of LPDDR4X RAM, the same as the iPhone XR.

The iPad Mini 5 is the final model with a home button, which has been present on all models since the original in November 2012.

The iPad Mini 5 was discontinued on September 14, 2021, with the announcement of the iPad Mini (6th generation).

The iPad Mini uses a Lightning port and has a headphone jack. It has a True Tone display, which allows the LCD to adapt to ambient lighting to change its color and intensity in different environments. It also has a wide color display (Display P3 color gamut), which means it can show more vibrant colors compared to the previous generation.

What are the specifications of the Apple iPad 5th Gen (2019) tablet?

Here’s a summary of the technical specifications for the Apple iPad 5th Gen (2019) tablet: 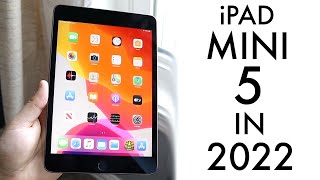