The first generation of iPad Pro is a line of iPad tablet computers designed, developed, and marketed by Apple Inc, first sold in 2015 at a screen size of 12.9 inch. A smaller model, based on the form factor of the iPad Air 2, with a 9.7-inch screen, was announced on March 21, 2016, and released on March 31, 2016, alongside the first-generation iPhone SE.

The 12.9-inch model was announced alongside the Apple Pencil, and both models were the first iPads to use the Pencil as an input device. The 12.9-inch iPad Pro is larger than all previous iPad models and was the first iPad to feature LPDDR4 RAM.

The 9.7-inch iPad Pro has a faster CPU and a better camera than the iPad Air 2. It is the first iPad to feature True Tone Flash and Retina Flash, and its 256 GB storage option is the highest for an iPad at the time. Its True Tone display allows the LCD to adapt its colour and intensity to ambient lighting.

Both iPad Pro models include the A9X chip and the Apple M9 motion co-processor. The 9.7-inch model, however, has a slightly underclocked CPU (2.16 GHz compared to 2.26 GHz on the 12.9-inch model) and only 2 GB of RAM. Several features are carried over from the standard iPad, such as Touch ID and the Retina Display.

New features include a smart connector for a keyboard and four stereo speakers located in pairs on top and bottom of the device. The 12.9-inch model has a 2732-by-2048 display and the 9.7-inch model has a 2048-by-1536 display. Both displays have a resolution of 264 pixels per inch and feature a variable refresh rate, a first for Apple. The 12.9-inch version is also the first iOS device to include more than 2 GB of RAM.

A customized 12.9-inch iPad Pro was also designed by Jony Ive and submitted to the Time for Design auction. The special edition iPad Pro has an “Edition 1 of 1” label engraved on its back and comes with a custom yellow-gold anodized finish, a blue leather Smart Cover, and an orange leather Apple Pencil case cover, all of which are not sold by Apple elsewhere.

What are the specifications of the Apple iPad Pro 1st Generation Wi-Fi + Cellular tablet? 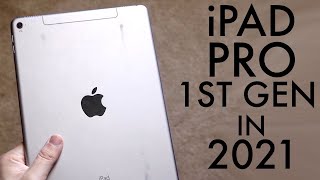 An iPhone would cost you twice as much in Brazil as compared in the United States.