The first-generation iPad (/ˈaɪpæd/ EYE-pad) is a tablet computer designed and marketed by Apple Inc as the first device in the iPad lineup of tablet computers. The device features an Apple A4 SoC, a 9.7″ touchscreen display, and, on certain variants, the capability of accessing cellular networks.

Using the iOS operating system, the iPad can play music, send and receive email and browse the web. Other functions, which include playing games and accessing references, GPS navigation software and social network services, can be enabled by downloading apps.

The device received positive reviews from various technology blogs and publications. Reviewers praised the device for its wide range of capabilities and labelled it as a competitor to laptops and netbooks.

Some aspects were criticised, including the closed nature of the operating system and the lack of support for the Adobe Flash multimedia format. During the first 80 days, 3 million iPads were sold. By the launch of the iPad 2, Apple had sold more than 15 million iPads.

On March 2, 2011, the first generation iPad was discontinued following Apple’s announcement of the iPad 2. The remaining stock of the first iPad was temporarily available from Apple at a reduced price.

Apple co-founder Steve Jobs stated in a 1983 speech about the company:

“[Our] strategy is really simple. What we want to do at Apple, is we want to put an incredibly great computer in a book that you can carry around with you and learn how to use in 20 minutes … And we really want to do it with a radio link in it so you don’t have to hook up to anything and you’re in communication with all of these larger databases and other computers.”

Apple’s first tablet computer was the Newton MessagePad 100, introduced in 1993, which led to the creation of the ARM6 processor core with Acorn Computers. Apple also developed a prototype PowerBook Duo-based tablet, the PenLite, but decided not to sell it to avoid hurting MessagePad sales. Apple released several more Newton-based PDAs; the final one, the Message Pad 2100, was discontinued in 1998.

Apple reentered the mobile-computing market in 2007 with the iPhone. Smaller than the (not yet announced) iPad and featuring a camera and mobile capabilities, it pioneered the multitouch finger-sensitive touchscreen interface of Apple’s iOS mobile operating system.

By late 2009, the iPad’s release had been rumoured for several years. Such speculation mostly talked about “Apple’s tablet”; specific names included iTablet and iSlate. The actual name is reportedly a homage to the Star Trek PADD, a fictional device similar to the iPad.

Steve Jobs announced the iPad on January 27, 2010, at an Apple press conference at the Yerba Buena Center for the Arts in San Francisco.

Jobs later said that Apple began developing the iPad before the iPhone but temporarily shelved the effort upon realising that its ideas would work just as well in a mobile phone. The iPad’s internal codename was K48, which was revealed in the court case surrounding the leaking of iPad information before launch.

The iPad was initially only available in Apple’s online store and its retail locations; it has since become available through retailers including Amazon, Walmart, and network operators. The iPad was launched in Australia, Canada, France, Germany, Japan and the United Kingdom on May 28. Online pre-orders in those countries began on May 10.

Apple released the iPad in Hong Kong, Ireland, Mexico, New Zealand and Singapore on July 23, 2010. Israel briefly prohibited the importation of the iPad because of concerns that its Wi-Fi might interfere with other devices. On September 17, 2010, the iPad was officially launched in Mainland China.

The iPad originally shipped with iPhone OS 3.2. On September 1, 2010, it was announced the iPad would get iOS 4.2 by November 2010; to fulfil this, Apple released iOS 4.2.1 to the public on November 22. It has several applications, including Safari, Mail, Photos, Video, iPod, iTunes Store, App Store, Maps, Notes, Calendar, and Contacts. Several are improved versions of applications developed for the iPhone or Mac.

The iPad syncs with iTunes on a Mac or Windows PC. Apple ported its iWork suite from the Mac to the iPad and sold pared-down versions of Pages, Numbers, and Keynote apps in the App Store. Although the iPad isn’t designed to replace a mobile phone, a user can use a wired headset or the built-in speaker and microphone to place phone calls over Wi-Fi or 3G using a VoIP application.

On October 12, 2011, iOS 5 was released to various iOS devices, including the first-generation iPad, and was downloadable through iTunes. The update was reported to contain hundreds of new features and tweaks, including Twitter integration, Notification Center and iMessage, which is a feature that allows users to send messages or multimedia files to other users on iOS or OS X, the operating system for Apple computers.

iCloud, an iOS app and Apple-provided internet storage service which allows users to sync and backup their user data and settings to/from other devices, was also made available through this update. On June 11, 2012, it was announced that iOS 6 would not be available for the first-generation iPad, making iOS 5.1.1 the final operating system.

The first-generation iPad features an Apple A4 SoC, which comprises a 1 GHz processor, 256 MB of RAM and a PowerVR SGX535 GPU. There are four physical switches on the iPad, including a home button near the display that returns the user to the main menu and three plastic physical switches on the sides: wake/sleep and volume up/down, plus a software-controlled switch whose function has changed with software updates.

Originally the switch locked the screen to its current orientation, but iOS 4.2 changed it to a mute switch, moving the rotation lock function to an onscreen menu. In the iOS 4.3 update, a setting was added to allow the user to specify whether the side switch was used for rotation lock or mute. Unlike its successors, the first-generation iPad has no cameras.

The display responds to other sensors: an ambient light sensor to adjust screen brightness and a 3-axis accelerometer to sense the iPad’s orientation and switch between portrait and landscape modes.

The iPad was equipped with 16 GB, 32 GB, or 64 GB (1 GB = 1 billion bytes) of solid-state (flash) storage for program and data storage. Furthermore, the device had two connectivity options: Wi-Fi only or Wi-Fi and 3G.

Unlike its successors, the Wi-Fi + 3G variant of the first-generation iPad could only support carriers that utilised GSM/UMTS standards and were not compatible with CDMA networks; however, assisted GPS services are supported like its successors. Bluetooth was also available on all models.

What are the specifications of the Apple iPad WiFi + 3G (1st Gen) tablet?

Here’s a summary of the technical specifications for the Apple iPad WiFi + 3G (1st Gen) tablet: 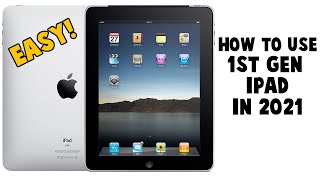 To raise capital for Apple, co-founder Steve Wozniak had to sell his scientific calculator.