The devices were unveiled alongside the iPhone 13 and iPhone 13 Mini at an Apple Special Event at Apple Park in Cupertino, California, on September 14, 2021. They became available ten days later, on September 24.

Major upgrades over its predecessor include improved battery life, improved cameras and computational photography, rack focus for video in a new “Cinematic Mode” at 1080p 30 fps, Apple ProRes video recording, a new A15 Bionic system on a chip, and a variable 10-120 Hz display, marketed as ProMotion.

The iPhone 13 Pro and iPhone 13 Pro Max’s design is mostly unchanged from its predecessor. However, the rear camera module now covers a larger area due to the larger lenses. The Face ID and camera module on the front display, or “notch”, is now 20% smaller than in previous generations.

The iPhone 13 Pro features a 6.1-inch 1170 x 2532 pixel display, and the larger iPhone 13 Pro Max features a 6.7-inch 1284 x 2778 pixel display. Both models have the Super Retina XDR OLED display with an improved typical brightness of up to 1000 nits, and a max brightness of up to 1200 nits, and for the first time in an iPhone, a variable 10-120 Hz ProMotion display, which can also go as low as 10 Hz to preserve battery and the term was previously used on the iPad Pro (2nd Generation) and later models.

The iPhone 13 Pro and Pro Max use an Apple-designed A15 Bionic processor featuring a 16-core neural engine, a 6-core CPU (with two performance cores and four efficiency cores), and a 5-core GPU. The A15 Bionic also contains a next-generation image processor.

More 5G bands are available to support more carriers, especially outside the US.

The wide and ultra-wide also have larger apertures to capture more light and increase low-light performance. The ultra-wide camera also has autofocus for the first time. The 77 mm telephoto has a smaller aperture than the 12 Pro’s but has the advantage of being able to use Night Mode for the first time. The larger telephoto also increases the digital zoom capability to 15x.

The cameras use Apple’s latest computational photography engine, Smart HDR 4. Smart HDR 4 processes recognised faces in photos separately using local adjustments. Users can also choose from various photographic styles during capture, including rich contrast, vibrant, warm, and cool. Apple clarifies this is different from a filter because it works intelligently with the image processing algorithm to apply local adjustments to an image during capture.

The camera app contains a new mode called Cinematic Mode, which allows users to rack focus between subjects and create a shallow depth of field using software algorithms. It is supported on the wide, telephoto, and front-facing cameras in 1080p at 30 fps.

Apple also added in iOS 15.1 the ability to record in Apple ProRes 4K at 30 fps for models with at least 256 GB of storage; however, base models with 128 GB of storage will be limited to ProRes recording at 1080p 30 fps.

The camera features a macro mode that can focus as close as 2 centimetres from a subject. It utilises the autofocus from the ultra-wide camera and is automatically enabled when close enough to a subject. 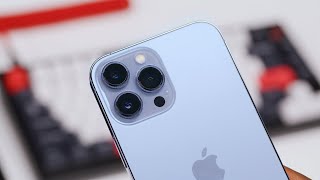