The iPhone (also known as the iPhone 2G, iPhone 1, or original iPhone) is the first iPhone model and the first smartphone designed and marketed by Apple Inc.

The iPhone was secretly developed by Apple Inc. in 2005 and was unveiled to the public on January 9, 2007. After years of rumors and speculation, it was officially announced on January 9, 2007, and it was released in the United States on June 29, 2007. Unlike most phones at the time, it had no physical buttons and used a touchscreen interface instead of a stylus.

It featured quad-band GSM cellular connectivity with GPRS and EDGE support for data transfer, and it made use of steady internet access and onboard processing to support features unrelated to voice communication. Its successor, the iPhone 3G, was announced on June 9, 2008.

The iPhone quickly became Apple’s most successful product and drove the company to become the most profitable company in history. It also helped establish a new type of software platform, known as the App Store, which allowed established companies and startup developers to build careers and earn billions of dollars while providing consumers with new ways to access information and connect with other people.

The iPhone appealed to the general public rather than the business community that BlackBerry and IBM focused on at the time, and by integrating existing technology and expanding on usability, it revolutionized the smartphone industry.

It was a revolutionary device, with a larger screen than any other cell phone at that time, and its touch screen interface made it possible to use apps like Safari or iMovie. The iPhone’s success paved the way for other smartphones, and it remains a cultural icon today. 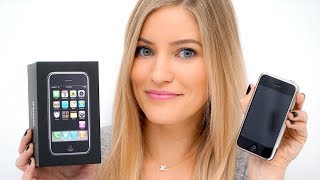