The iPhone 7 and iPhone 7 Plus smartphones were designed, developed, and marketed by Apple Inc. They are the tenth generation of the iPhone.

The device’s internal hardware received upgrades, including a heterogeneous quad-core system-on-chip with improved system and graphics performance, upgraded 12-megapixel rear-facing cameras with optical image stabilization on all models, and an additional telephoto lens exclusive to the iPhone 7 Plus to provide enhanced (2x) optical zoom capabilities and portrait mode.

The front camera is the first in the series with 1080p (Full HD) video resolution. The iPhone 7 & 7 Plus are supported from iOS 10 to iOS 15, and they are the second to support six versions of iOS after the iPhone 5S.

iPhone 7 is rated IP67 water and dust-resistant, making it the first officially water-resistant iPhone, although tests have resulted in malfunctions, specifically distorted speakers, after water exposure. The warranty does not cover any water damage to the phone.

The iPhone 7 and iPhone 7 Plus are the first iPhones not to feature a 3.5mm headphone jack. It was replaced by a second speaker grille that serves as a vent for the internal barometer. A Lightning-to-3.5-mm-connector adapter, as well as in-ear headphones that use the Lightning connector, were bundled with the device, and the adapter is also sold separately as an accessory.

The adapter is also compatible with other iPhone, iPad, and iPod Touch devices running iOS 10 and newer.

iPhone 7 uses the Apple A10 Fusion 64-bit system-on-chip, which consists of two low-power cores and two high-power cores (only two cores are used at any point in time). The A10 chip also features a hexa-core graphics chip capable of “console-level gaming”.

As with prior models, iPhone 7 is available in two sizes: one with a 4.7 in (120 mm) screen, and a “Plus” variant with a 5.5 in (140 mm) screen. The displays have identical sizes and resolutions to iPhone 6S, but with a wider colour gamut and increased brightness. The screen-to-body ratio is about ~66% and ~68% for the 7 and 7 Plus, respectively.

Both device variants also contain a new iteration of Apple’s motion coprocessor, the M10. Unlike previous iPhone models, internal storage options for iPhone 7 begin at 32 GB instead of 16 GB and max out at 256 GB. iPhone 7 Plus offers 3 GB of RAM, more than any other previous iPhone; the 4.7-inch iPhone 7 has 2 GB.

iPhone 7 Plus with a dual-lens camera. The iPhone 7 includes a 12-megapixel rear-facing camera with a quad-LED “True Tone” flash; its aperture was widened to f/1.8, and the standard-size phone model adds optical image stabilization – a feature that was previously exclusive to Plus models.

The iPhone 7 Plus includes a second 12-megapixel telephoto lens, which can be used to achieve 2× optical zoom, and up to 10× digital zoom. However, the telephoto camera has an f/2.8 aperture and lacks optical image stabilization.

The iPhone 7 and 7 Plus record video with single-channel mono audio. Still, photos with 6.5 megapixels (3412×1920) can be captured during video recording.

The front-facing camera was upgraded to a 7-megapixel sensor with automatic image stabilization. The iPhone 7 and 7 Plus are the first iPhones to be able to record 1080p video using the front camera. 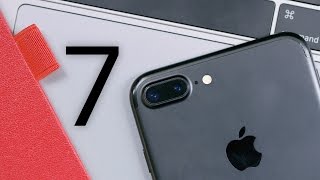 November 4, 2019 – Apple announces a $2.5 billion financial package to help address the housing crisis in California, which has worsened in part because of the rapid growth of tech companies.