Apple iPhone 8 Plus Review and Features

The iPhone 8 and 8 Plus were discontinued as of February 2020, having sold 86.3 million units worldwide, making them one of the best-selling smartphones of all time. The entry-level iPhone SE second and third generations share the exterior dimensions of the iPhone 8.

The iPhone 8 and 8 Plus were the final models of the flagship iPhone model to feature the Home Button and Touch ID.

The iPhone 8 and 8 Plus retain the Retina HD Display found in the iPhone 7, but they now feature True Tone technology, allowing for automatic screen adjustments based on ambient lighting.

They can play HDR10 and Dolby Vision content despite not having an HDR-ready display, done by down-converting the HDR content to fit the display while still having some enhancements to dynamic range, contrast, and wide colour gamut compared to standard content.

The iPhone 8 Plus upgrades the main camera for a wide-angle lens with up to 10× digital zoom or 2× optical zoom and retains a second telephoto lens similar to the one found on the iPhone 7 Plus but with improved depth-of-field and lighting effects in Portrait mode.

The iPhone 8 and 8 Plus record videos with single-channel audio (mono). Still, photos with 6.5 megapixels (3412×1920) can be captured during video recording.

The phones also feature an Apple-designed graphics processing unit 30% faster than prior units, with the same level of performance as the A10 at half the power.

The phones have glass backs instead of the complete aluminium housing found on prior models, enabling the use of Qi inductive charging.

The phones are rated IP67 for water resistance and dust resistance. Both models have 64 and 256-gigabyte storage options and are offered in silver, gold, or Space Gray colour options.

The iPhone 8 has a 6 out of 10 reparability score from iFixit, mainly due to the use of excessive glue for the back glass. 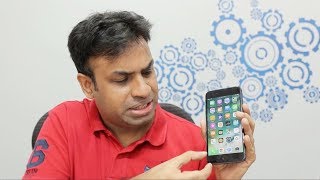