The fifth-generation iPod, sometimes colloquially known as the iPod Video, is the first iPod to be available in an alternative colour scheme in a non-special-edition form, as a black option was added alongside “Signature iPod White” and marked the second full redesign of the iPod’s aesthetic with its re-arranged proportions, its return to a fully flat front plate, and its more rounded rear casing.

The fifth-generation iPod was updated on September 12, 2006; this model is officially known as “iPod (Late 2006)” and is unofficially referred to as “5th generation enhanced” and “5.5th generation”. This update included a brighter screen, longer video playback time, improved video decoding hardware, newly designed earphones and a search feature.

An iTunes installation CD was no longer bundled, requiring users to download iTunes from Apple’s website. The 60GB model was replaced with an 80 GB model, and prices were cut by US$50 for both the 30 GB (US$249) and the 80 GB (US$349) models. Gapless playback and support for iPod games were enabled on all fifth-generation iPods through a firmware update released simultaneously.

The fifth-generation iPod plays video in MPEG-4 (up to 480p 2.5 Mbit/s) and H.264 (up to 240p, 768 kbit/s, baseline profile level 1.3 only) formats. The enhanced fifth-generation iPod, and firmware 1.2 for its predecessor, upgrade H.264 support to 480p 1.5 Mbit/s. As is the case for music, video content such as TV shows, podcasts, music videos, and movies may be purchased from the iTunes Store (with DRM, with rental options launched later) or sourced externally and imported via iTunes.

Videos or photo slideshows may be played from the fifth-generation iPod on a television set, projector or monitor using the Apple Composite AV cable or via an older dock providing an S-Video output. It is also possible to obtain composite video from the headphone jack using an iPod AV Cable or generic equivalent (appropriately wired TRRS minijack), a feature removed from the following generation. 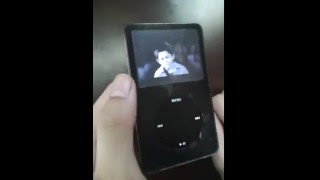 Despite being the co-founder, Jobs was in a bit of a power struggle with CEO John Sculley in the 80s, which eventually led to his resignation from Apple. Jobs went on to take on more successful projects, including NeXT computers and Pixar. He rejoined Apple in 1996 after Apple bought NeXT, and much of the tech used in NeXT made its way to apple products, and finally evolved into the Mac OS X.