Released on January 11, 2005, during the Macworld expo, the first-generation iPod Shuffle weighed 0.78 ounces (22 g), resembled a pack of chewing gum sticks, and was designed to be easily loaded with a selection of songs and to play them in sequential or random order.

It used the SigmaTel STMP35xx system on a chip (SOC) and its software development kit (SDK) v2.6, a flash memory IC, and a USB rechargeable lithium cell.

It lacks a display, the trademark click wheel, playlist management features, and the games, address book, calendar, alarm, and notes capability of larger iPods. Due to the codec not being ported, it is incapable of playing Apple Lossless and AIFF audio files. The iPod Shuffle series also lacks a real-time clock and does not, therefore, update the “Last Played” value in iTunes.

The 1 GB model was advertised as capable of holding up to 240 songs (based on Apple’s estimate of four minutes per song and 128 kbit/s AAC encoding).

To cater to the limited capacity and intended usage scenario, two new features were added to iTunes: AutoFill, which selects songs at random from a user’s music library (or from a specific playlist) and copies as many as would fit into the iPod Shuffle’s storage – available as a supplement or replacement to manual selection; and an option to automatically transcode audio files of higher specifications to 128 kbps AAC-LC while transferring them (which would remain exclusive to the iPod Shuffle series until iTunes 9.1).

Furthermore, older versions of iTunes allowed an iPod Shuffle playlist to be viewed and changed while the unit is not connected; changes would be synchronized the next time the unit is connected. However, this functionality was removed in iTunes 7.

Due to superior audio technology in the SigmaTel STMP35xx SOC and SDK, the first generation had a better bass response than a fourth-generation iPod. 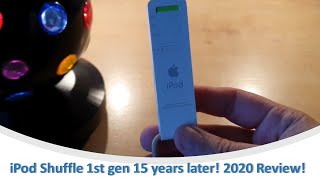 The first hard disc for Apple II had a storage capacity of five megabytes (MBs).