On September 12, 2006, Apple announced the release of the second-generation iPod Shuffle, calling it “the most wearable iPod ever”.

The second generation initially featured a lone 1 GB model in a silver brushed aluminium case, similar to the second-generation iPod Nano and the older iPod Mini. The new model was less than half the size of the first-generation model at 41.2 x 27.3 x 10.5 mm (1.62 x 1.07 x 0.41 in) and was the size of the iPod Radio Remote.

Apple claimed it was the “world’s smallest MP3 player”. This generation included the new built-in belt clip, and the actual unit was thinner, with the entire device weighing only 15.5 g (0.55 ounces). The power/shuffle/no shuffle switch from the first-generation version was separated into two controls to avoid an accidentally selected mode of operation.

On the second-generation iPod Shuffle, USB connectivity is provided via an included piece of hardware which acts as a docking station for data transfer and recharges the iPod’s internal battery through its headphone jack.

The second-generation Shuffle could play MP3, MP3 VBR, AAC, Protected AAC, Audible (formats 2, 3 and 4), WAV and AIFF. Due to its low processing power, the only iTunes-supported file format that the iPod did not support is Apple Lossless. 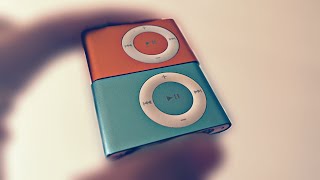 Apple is so successful, that in the first quarter of 2014, it made more money than Amazon, Google, and Facebook combined.