The fifth generation iPod Touch (stylized and marketed as the iPod touch and colloquially known as the iPod Touch 5G, iPod Touch 5, or iPod 5) was unveiled at Apple’s media event alongside the iPhone 5 on September 12, 2012. It was released on October 11, 2012.

A mobile device designed and marketed by Apple Inc. with a touchscreen-based user interface, it succeeded the 4th-generation iPod Touch. It is compatible with up to iOS 9.3.5, which was released on August 25, 2016.

Like the iPhone 5, the fifth-generation iPod Touch is a slimmer, lighter model that introduces a higher-resolution, 4-inch screen to the series with a 16:9 widescreen aspect ratio, similar to the iPhone 5, 5C, and 5S.

Other improvements include recording 1080p video and panoramic still photos via the rear camera, an LED flash, Apple’s A5 chip (the same chip used in the iPad Mini (1st generation), iPad 2, and iPhone 4S) and support for Apple’s Siri.

The fifth-generation iPod Touch was released with more colour options than its predecessors. It initially featured a black screen and slate back and a white screen with five back colour options, including silver, pink, yellow, blue, and Product Red; however, on the release of the iPhone 5S, the slate colour was changed to space grey, and all the other colours remained unchanged.

Storage capacities are available at 32 or 64 GB, with a 16 GB announced at a later date to replace the previous generation.

The Retina Display of the iPod is similar to the one on the iPhone 5, measuring 1,136 by 640 pixels with an aspect ratio of almost exactly 16:9. Measuring 4 inch diagonally, it has a display size of 6.7 square inch and a pixel density of 326 PPI which remains the same as the fourth generation.

The fifth-generation iPod Touch’s finish features an aluminium unibody made from the same kind of anodized aluminium used in the MacBook line. With a new iSight camera and LED flash, the iPod Touch includes a new feature known as the iPod Touch Loop.

At the bottom left corner of the back of the iPod Touch, there is a button that can be pressed to allow a wrist strap to attach to the iPod Touch. Other changes to the iPod Touch include the addition of colours and the return of the black Wi-Fi antenna. 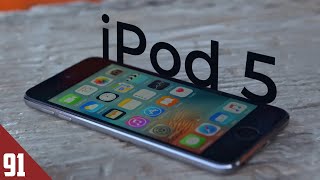 After nine months, Jobs gave in and underwent surgery. Many consider the delay a major factor in his eventual decline.